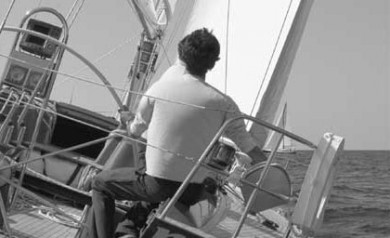 Comar, under the name of Sipla, began its activity by producing fibreglass Flying Juniors in 1961 in Forlì, Italy. In those days plastic production was at its beginning and was a pioneering enterprise, so much so that to type-approve the first boat the company resorted to a stratagem: the hull was painted brown, fake wood veins were added and the sailboat was brought to a shipyard well known for its classic line.

Rina engineers (the validating agency) were shown the small vessel and kindly asked for type-approval. The officials were busy analyzing a much more important boat and didn’t really stop to consider the “little jewel” in fake wood. By validating the prototype the unaware engineers gave birth to a company that then after produced more than 4500 boats.

The boat was designed by Van de Stadt and a very young Finot; she was so innovative and above the lines that on the eve of her launch, with the boat already registered to take part in the Middle Sea Race, both designers called Sipla to disown authorship. The rest is history. The Comet 910 beat the whole fleet hands down, humbling much bigger and prestigious boats. The commercial success was immediate and long lasting: almost 1000 units were produced in a 15 year time span. Thanks to the Comet 910 Sipla was able to build new plants, the most leading edge technology factories at that time, and prepared the field for new models. After 10 years of experience the company decided to change its name to Comar and cemented its collaboration with yacht designer Finot, solidifying its success.

Ground breaking sailboats were born which were immediately welcomed by the boating community. The Comet 801, Comet 11, Comet 13 and Comet 14 were all characterized by unprecedented solutions even as far as the interiors were concerned with the salon moved to the far stern. On the water the boats were fast and comfortable, offering cutting edge deck solutions for those years like genoa and mainsail furlers and affordable pricing. In the 80s Comar’s designer team included Finot, Doug Peterson and Andrea Vallicelli. New performing and roomy boats were built with traditional waterlines but in tune with the times.

Many Comet owners decided to take part in the races of those days achieving great results. At this point Comar was well on its way in becoming Italy’s most important sailboat producer while at the same time exporting a significant number of units. In 1989 it covered an area of 43000 square meters of which 16000 covered, producing 145 boats with 160 employees and a 25 billion lira turnover. The same year the Comet 333 was chosen as the boat for the first edition of Giro d’Italia a Vela (a race circumnavigating Italy). In the 90s Comar introduced two new models: the thirteen meter Genesis 43 and the fifteen meter Phoenix, both encountering great success, so much so that they are still much sought after on the used market. The two models represented a radical change in the production line, aiming to improve quality in all sectors. New and for the time ultramodern techniques were adopted: termanto or balsa sandwich and vacuum lamination. Comar also began producing racing one-offs like Stradivario, designed by Vallicelli that won four consecutive editions of the Centomiglia del Garda.

The economic crisis at the end of the 90s affected many businesses in the nautical industry and, notwithstanding the success of the latest models, Comar was not left unscathed. Comar’s new course started in 1998 when Massimo Guardigli buys the name and technology. With the current leadership the company set new objectives. The market in the meanwhile had evolved in an unforeseeable direction which led some boatyards to mass produce select models in a price war context. The giant industrial groups bulldozed those that attempted to compete in the extreme mechanization field. This process though eventually led to a progressive quality impoverishment due to an time excessive oversimplification of the production line. In this scenario a renewed Comar pinpointed a niche in the nautical sector: the refusal of a overly standardized offer went hand in hand with the search of a personalized and high quality product which rejected the notion of a “disposable good”.

The challenge was deeply shared by all the levels of the company, from top management to the production line and dealership: to offer high quality, seaworthy and sturdy boats at a truly competitive price. The first models followed the path that had been previously left. The Comet 38, Comet 50 and Comet 65, designed by Bruce Farr and Comar’s first Maxi, came alongside to the Genesis 43. Soon after the Neapolitan yacht designer Sergio Lupoli drew two new models, the Comet 33 and the Comet 36, elegant and performing boats that reaped great successes in numerous international racing events. Once again Comet’s style and quality level was about to undergo another pivotal change. Andrea Vallicelli and Alessandro Nazareth presented a revolutionary and apparently risky design: the Comet 51 Sport, an aggressive cruiser-racer. The public’s and reviewers’ approval was immediate, thereby encouraging Comar in further infrastructure investments. The entire range was updated with the 45S and the 41S that shared the 51S’s spirit. All boats which are much loved by the owners for their design, high quality and that in the past years have confirmed excellent performances by winning many prestigious international trophies. Lately the “deck salon” models have had more and more success: the raised deckhouse and large windows make the interiors particularly luminous. Comar taps into this and creates the “Raised Salon” line which combines the functionality of a deckhouse to very sporty lines.

The Comet 52 and Comet 62, designed by Studio Vallicelli, are the first two models of a line destined to grow. The yard develops new building technologies while maintaining a high degree of craftsmanship, ensuring e possibility of personalizing each boat for its owner, from the interiors and layout to the standing rigging and appendages. An approach that makes Comar a versatile structure able to satisfy its boat owners and always ready to face future challenges.

We use cookies on our website to offer you the most relevant experience by remembering your preferences and repeat visits. By clicking on "Accept" you agree to the use of ALL cookies. However, you can visit the Cookie Settings to provide controlled consent. Read more
Cookie settingsACCEPT ALLREJECT
Manage consent

This site uses cookies to improve your experience while browsing the site. Out of these cookies, the cookies that are classified as necessary are stored on your browser as they are essential for the basic functionality of the website to function. We also use third party cookies that help us analyze and understand how you use this website. These cookies will be stored in your browser only with your consent. You also have the option to disable these cookies. But disabling some of these cookies could have an effect on your browsing experience.
Necessary Always Enabled
Necessary cookies are absolutely essential for the website to function properly. These cookies guarantee the basic functionality and security features of the website, anonymously.
Functional
Functional cookies help perform certain functions such as sharing website content on social media platforms, collecting feedback and other third party functionality.
Performance
Performance cookies are used to understand and analyze key website performance indices which help provide a better user experience for visitors.
Analytics
Analytical cookies are used to understand how visitors interact with the website. These cookies help provide information on visitor numbers, bounce rate, traffic source, etc.
Advertisement
Advertising cookies are used to deliver relevant ads and marketing campaigns to visitors. These cookies track visitors to websites and collect information to deliver personalized ads.
Others
Other unclassified cookies are those that are analyzed and have not yet been classified into a category.
Save & Accept